The “Mill on the Denacre” was one of four mills built on the banks of the Denacre. The stream is several kilometers long and joins the Wimereux before running into the English Channel.

A few facts about the mill:

An old mill already existed at the beginning of the 18th century but was small and in need of repair. The present larger mill was built in 1777 and completed in 1780. The Denacre was then canalized and the waterfall created.

Building work was done with stone from the “Marquise” quarry and included the mill and the waterfall which supplied the necessary energy to turn the wooden watermill. The huge millstones were situated a little further down and were used to crush the wheat. The miller’s accommodation (a big square building) included a bread shop with a big wood-heated bread oven in the vaulted cellar which looks out over the stream. The bread oven is still there today. 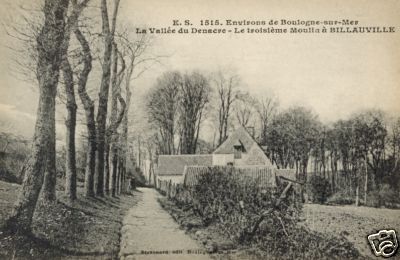 Above the cellar was the miller’s living accommodation on two levels. The sacks of wheat were kept in the attic under the diamond pointed roof and were hoisted up there by a pulley from the doorway in the courtyard. The bread shop supplied bread to much of the village of Wimille and this activity lasted until 1850. After this time modern technics made the activity obsolete and the milling part of the building was taken down and the stone used to build other buildings.

The mill was subsequently used for different agricultural purposes. A family lived there up until 1950 and was able to be self-sufficient by keeping cows in the stable (which is still there today) and by growing crops and vegetables on the surrounding land. The mill was then occupied until 1985 by somebody who worked locally. 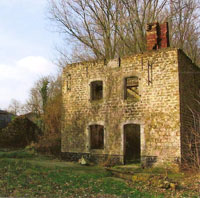 After that the mill was then unoccupied for a short period of time and was sadly vandalized and set fire to. Its condition continued to deteriorate until 2008 when rebuilding work was undertaken in order to transform it into accommodation for tourists.

Come and experience it for yourself… the old walls have secrets to tell!